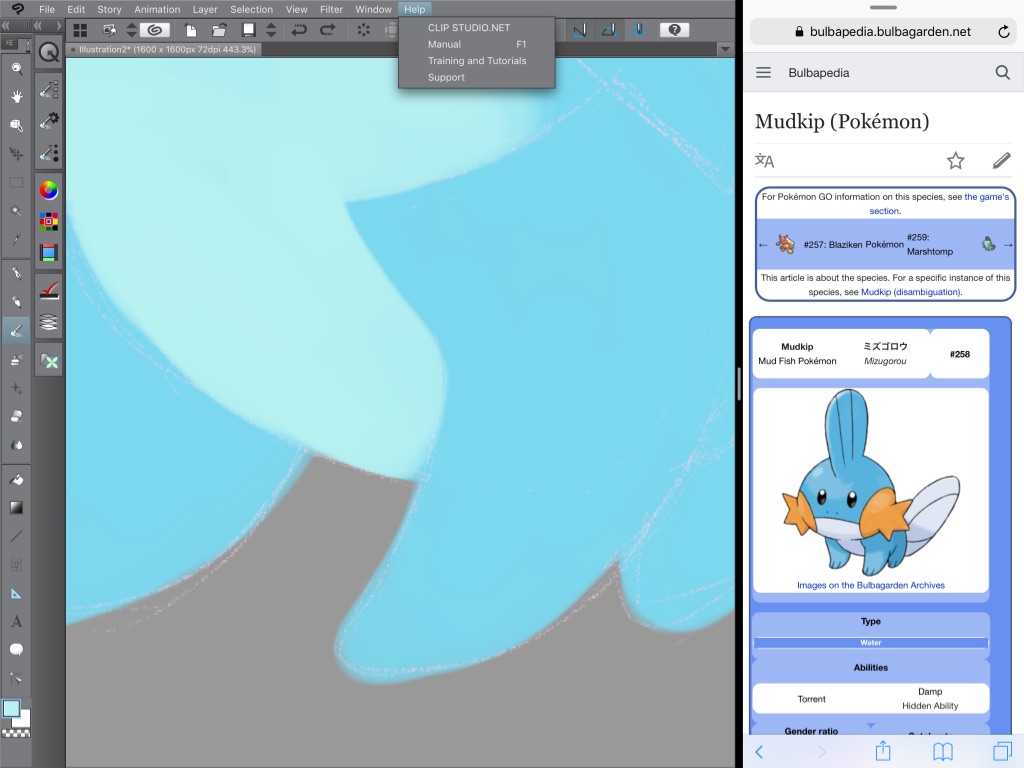 I first looked at digital painting in 2015 (where I was largely disappointed). In 2017 I’d settled on Procreate on the iPad Pro 12.9” with the Apple Pencil. Since that review I’ve spent a lot more time painting—both on the iPad and with acrylics—and developers have spent time improving the tools.

Hardware-wise, not a lot has changed; although Apple has released a new large and regular-sized iPad Pro, I haven’t been tempted to update yet. There hasn’t been a new Apple Pencil. I’m still hopeful that Apple will find a way to make the pencil work without a battery, or at least find a way to charge it where it doesn’t look absurd.

In November 2017 CELSYS released Clip Studio Paint EX (what a mouthful), which is basically the Windows tablet-optimised version of Clip Studio/Manga Studio1. I only found out much later, but I jumped right in.

This app has me completely divided.

What I love most about Clip Studio is the colour blending and brushes, and the iPad app has nailed this. It feels exactly like the Windows or Mac version. The watercolour brushes are fluid and soft, the oils are buttery, the pencil is responsive, the pressure sensitivity is bang on. I imported a set of Copic colours and was off; it was how I’d always wanted my Asus Vivo Note 8 to be (which is to say: not running Windows, much larger, not dead).

The downside of this app is that it feels exactly like the desktop version. There’s a ‘File’ menu and a save button with a floppy disk icon! This app would be impossible to use without the Apple Pencil, because all the buttons are tiny. The app does support the iPad split view properly, but it has no integration with Files so any documents have to be manually exported using what looks like a hack on the save dialogue. Being somewhat tablet optimised, the app does support pinch-to-zoom and pinch-to-rotate, which really is a must have.

Having spent a lot of time with Procreate, Clip Studio on iPad looks incredibly old-fashioned and feels out-of-place. However, having all the buttons just there on the screen with no hidden gestures or swipe-to-reveal has reminded me that desktop apps have something to offer. Particularly on the (giant) iPad Pro 12.9”, you can actually fit in a lot of buttons. You don’t need to hide things behind other things, or use a triple-three-finger-tap. One of the things I strongly dislike about Procreate is how many common tasks (alpha lock, layer opacity, paste) are hidden behind gestures that I keep forgetting.

Maybe I’m just old, but for me the wonder of the graphical user interface is that everything is just there. Gestures feel like being thrown to a terminal for an unfamiliar OS. How do I copy again? Was it select and middle-click or double-tap with two fingers?

Clip Studio EX has a six-month free trial, which is quite generous. But after that it’s AU$12 a month. Ouch. I already own the desktop version of Clip Studio, and I paid around USD$60/AUD$80 for a perpetual licence. The iPad version will cost that much after seven months. I completely understand why developers are moving to a subscription model, as it’s almost impossible to charge enough up-front and maintain enough momentum for growth to have sustainable income. In addition, the App Store continues to have no way to offer upgrade pricing, which was a key component of the pre-App Store pricing world.

For the moment, I’ve set a six-month reminder for when my free trial ends, and I’ll see then how much I value having Clip Studio on iPad.

When iOS 11 was announced I was stoked. But after I patiently waited through the beta period2, I was actually disappointed. In iOS 10 I’d removed a bunch of apps from my iPad, because the list in the slide-over pane was too long. But now you have to do this crazy tap-hold-drag dance to get two apps open side-by-side. And you can only have each app once, so if you want to see two windows of Safari next to different apps, tough luck.

I am loving the new Files app (although not the name, can Apple please hire someone who can name things). It makes it a lot easier to deal with my mess of documents across iCloud, Dropbox and Google Drive. It could do with having a split view, that would make moving files around a lot easier. I’ve also noticed how much I navigate Finder on the Mac with my keyboard, which doesn’t work at all with Files. I hope they expand the keyboard support.

I’m also hopeful that Apple’s rumoured renewed focus on quality will mean that iOS 12 delivers fixes for some of the continuing infuriating bugs I see.

While the iPad Pro is definitely improving, it has a long way to go, so I’m still keeping an eye out to see what the alternatives are.

Microsoft (finally!) updated the Surface Pro 4 to the “New” Surface Pro3. The biggest change here appears to be battery life and the i5 not having a fan. Both nice to have, but Microsoft still doesn’t offer enough options. To increase the storage you have to go up a CPU, and the same for the RAM. It’s a shame, because I think a Surface Pro with an i5, 512GB or even 1TB of storage, and 8GB of RAM would be pretty sweet. The m3 version also only has 4GB of RAM and 64GB of storage, which is just way too low for both. Intel’s m3 processor is actually pretty sweet, offering a good compromise for an ultra-portable.

Also, it still runs Windows. Which is a pity, as my last experience of Windows 10 involved it shutting down to install updates while I was actively working on an open document with unsaved changes. I know other people complain about it doing that overnight, and to be honest I think that’s also pretty annoying. But updating while you’re using it makes it feel like it’s done a BSoD. Maybe I’ll try again when Windows 11 comes out.

Microsoft continues to sell the Surface Pro without the keyboard or the pen, which adds about AU$400 to the price. Ouch.

The old guard in digital art is Wacom. And indeed I still use a Wacom graphics tablet at work as a mouse replacement. Wacom’s entry-level no-screen graphics tablets have just seen an update that brings bluetooth to the low end which is welcome given how many laptops these days are dropping ports or only have USB-C ports.

At the complete opposite end, Wacom showed off its 32” Cintiq at CES, along with the Cintiq Pro Engine, a plug-in PC for the 26” and 32” behemoths. At around US$3.5k each for the display and the PC these aren’t really consumer electronics. But Cintiqs like these are what hobbyist digital artists drool over (and pros sweat over paying off).

In the middle is Wacom’s own tablet PC, the Mobile Studio Pro which comes in 13” and 16” models. In Australia the 13” Wacom is substantially more expensive than the Surface at the low end, but similar at the high end. The 16” model is AU$4.5k for the 512GB model, which is eye-watering. However, nobody else is offering a similar extra-large tablet option (even if it does weigh 2.2kg) and I applaud Wacom for continuing to try new options.

The Wacom tablets that come with a PC of course run Windows 10, but all of them can be used as an extra display for a Mac as well. Unlike Microsoft, Wacom is embracing USB-C with the Cintiq Pro and Mobile Studio Pro having USB-C ports.

Rounding up the set of too many products ending in Pro, is… oh wait. It’s Astropad Studio. Both the Standard and Studio versions of Astropad take your Mac’s screen and put it on your iPad, passing through the inputs. For Standard, this includes some stylus pressure sensitivity into some Mac apps. Studio is built specifically for the Apple Pencil, and is optimised to reduce lag for that one stylus. Reviews have been overwhelmingly positive, but my experience is that it’s only okay.

The lag between the iPad and the Mac means the iPad software has to show you a little preview line so you know where you’re going, letting the Mac app catch up. This is better than the alternative of the line lagging behind the pencil, but it’s not as good as native iPad software which can have so little lag it feels like a real pencil.

Another problem is that the Mac and the iPad’s screens aren’t the same size. They’re not even the same aspect ratio. So you can choose between squishing your Mac screen onto your iPad, or cutting a section out and viewing that. Squishing means that everything is tiny, even on the 12.9” iPad. Cutting means there’s invariably some tool or window just out of reach and you have to go to your trackpad to use it.

These are basic limitations of third-party software attempting to bridge this gap. If there was a way to reboot the iPad into a display mode for the Mac, both of these problems would go away, but Apple seems highly unlikely to choose that path.

To my knowledge there haven’t been any major advances in the technology of old-fashioned paint. But there has been a major advance in my understanding. Part way through this year I purchased some artist’s quality heavy body acrylic paints. I’d always hated acrylics, the colours mixed in ways I didn’t like and the texture and final look were unappealing. I should have known from switching to artist’s quality watercolours that I could get a lot more enjoyment from acrylics than I had.

Quality acrylic paints have filled the gap in my painting that occurred when I threw out my oils. Oil paints are beautiful, buttery, glossy. But they also need good ventilation and take forever to dry. Not practical in a small apartment. My new acrylics are not quite as good as oils, but finally I have opaque paints where I get what I expect when I mix colours. I can also add some gloss medium to make it a bit more creamy.