There’s been some recent brouhaha over how “air travel was exciting” and glamorous in the ’50s and ’60s. Which isn’t, of course, a new complaint. But it is rubbish. It was boring, smoky, dangerous, noisy, and drunken.

But the legroom! The touch of class! Airport queues were not an ordeal. Well, actually, you can have that now. But let me take you on a little trip first.

It is Monday December 1st, 1947 and a QANTAS Lockheed Constellation is preparing to leave Sydney airport. Its destination is London, via the Kangaroo Route. This is the first time a ‘direct’ flight has been available from Sydney to London. Before now, QANTAS flew to Singapore, and from there you could take an Empire Airways flight to London. Today there are just 29 passengers, and 11 crew, and they’re leaving at 22.30.

It will take them nearly four days. You see, the plane can’t fly well at night, and it needs to refuel regularly. So they’ll be stopping in Darwin, Singapore, Karachi, Cairo, Castel Benito (Tripoli), and London. They’ll spend the nights in Singapore, Karachi, and Cairo.

Six years later, in 1953, this same trip will be leaving every day except Sunday and cost £529 4s (that’s British pounds, not Australian). The cabin looks rather like a Dash-8.

Okay, so not many people could pay that! Clearly only the Queen and other VIPs were flying.

Not all of us are jet-setting across the world. Sometimes you just need to be at a wedding one state away, and you’d rather not drive for eight hours straight. Fair enough, you’re not alone. The route between Sydney and Melbourne is the 5th busiest in the world. Maybe you’re budget concious too, so you’re going to fly ANSETT.

Today the flight time is an hour and a half, and the cost goes from about $125 return (JetStar) to $450 at peak times (QANTAS). There’s over 90 flights each way per day. 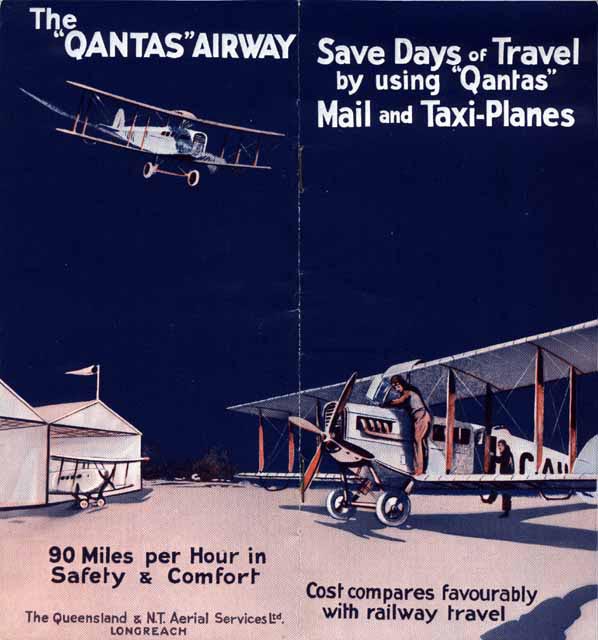 [From the collection of David Zekria]